There – Recollections from a Walk of Shame

In a contemplating conversation Signe Myklebust and Rikko Voorberg took me back in time, to Bosnia, where they spent a week walking. From Tuzla to Sarajevo, to Bihac and Velika Kladusa. Meeting people on the move at the borders of Europe. Their hands empty and hearts full. They took me back on a walk they went on “to be”. 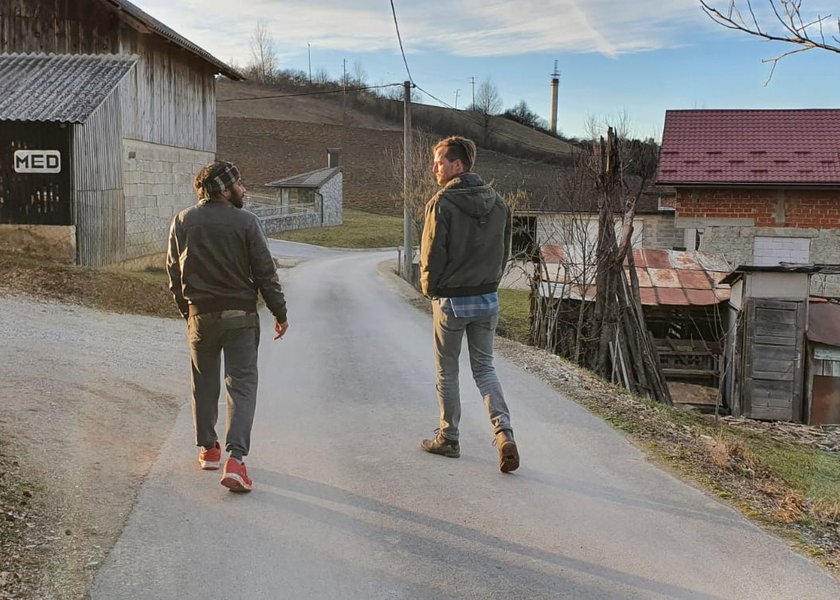 I return to this text having been on a Walk myself. Felt – that which they had described. A bit. For a short time. Still. Felt it in my eyes. Discovered the forest – which breathes. Living trees which protect. Traces of those who leave. In an attempt to live. I come back to this text full of words to invent. To say. Telling you what there is. Beyond. The world after the words. I come back to this text a being of silence.

There sometimes is no question to be asked. No silence to be broken nor issue to be fixed. No help to be brought. Nothing to do but be. Listen and breathe. Welcome and scream – or not, not even scream. On a Monday evening, as the sun set over the Netherlands, Norway and France, Rikko Voorberg and Signe Myklebust, welcomed me into their memories. Miles apart we went back in time, wandered around, thought, shared and kept quiet, sometimes.

They took me to Bosnia, where they spent a week walking, from February 13th to 18th, 2022. From Tuzla to Sarajevo, to Bihac and Velika Kladusa. Meeting people on the move at the borders of Europe. Their hands empty and hearts full. They took me back on a walk they went on “to be”.

It was a first experience for Signe, Norwegian deacon working in the field of integration and interfaith, who describes the Walk as a “a very unique introduction to people and situations”, allowing walkers to “actually connect and be with people we know and forget about, do not have access to (…), who try, have the right to cross the border to get asylum… but cannot”. If NGO employees and volunteers relentlessly work on the ground every day to offer support and assistance to people on the move, Signe, “coming from very privileged” Northern Europe, had been looking for a way to simply meet, spending time with them for a while.

“And there we were – sharing stories, singing songs, eating food, playing… In spite of the harshness of those lives on hold – being there.”

“The need exists – to just be instead of help”, Rikko Dutch public theologian, sometimes artist and if everything else fails: activist, confirms, explaining how the seemingly “purposelessness” of the walks challenges our Western perspective, where help justifies the presence of Europeans by the side of people on the move.

“And there we were”, Signe remembers, “sharing stories, singing songs, eating food, playing. Together. In spite of the harshness of those lives on hold – being there.”

“I am happy you trusted us”, Rikko smiles, conscious of the originality and complexity of such an experience, with its inevitable moments of awkwardness, looking for people on the move on stations’ platforms, of silence and doubt in the first minutes of the encounter, of distance and pain.

No human being is illegal.

Of shame, too. That feeling which Signe, as a European citizen, has been struggling with for a while. “We violate people’s rights by not letting them in. Who are we to decide who can and cannot enter, to put people’s lives on hold ?” she asks, remembering that man who has been on the move for sixteen years – “sixteen years being an being an illegal human being ! What about one’s rights to safety, establish a life, make plans? That living under constant pressure, in fear, one day after the other, not knowing what’s going to happen nor how to cope – that’s not a life.” And yet, “we, Europeans, do not care. We are not interested in that, we just pretend they don’t exist and keep on supporting the European Union’s policies”, building borders and borders and borders. In that, the contrast with the reaction to and management of the Ukrainian war and resulting migrations is striking, which to Rikko, has been the greatest illustration of that Fortress Europe which protects you when you belong, letting you die out when you don’t. With the constructed and passive complicity of too many of us.

Of our parallel lives and encamped eyes.

“In all societies, villages and cities, we live parallel lives”, Signe notices. “We are asked and educated to not notice migrants.”

And then comes the Walk of Shame, which very goal is to look for, to see, uncover, those invisible, isolated, overlooked people. Rikko further describes this division between the “allowed, welcomed bodies of the tourists, locals, and those who are othered”. That encampment system is very visible in some regions of Bosnia, where locals may be forbidden to give people on the move any food or help, or to give them a ride with their car, that is clearly encouraged to pass by and ignore them, leaving them to the management of the state as the undesired threatening foreign bodies they are made to be.

“What struck me”, Signe reflects after a moment, “was just how different people are, from one another.” And there came the dreamer, the racing cars lover, that woman who, devastated after a pushback, slowly got back on her feet, that family looking after a dog so kindly – as many faces and stories drawing lives and beings.

“Not knowing any of them makes you think of them as a group ‘migrants’ but people are different.”

But migrants are people.

As Rikko is walking, Signe remembering and I writing, night slowly rises, wrapping us in its warmth and quietness, our silence and secrets.

Signe, who had never been on a Walk before travelling to Bosnia, felt lucky to go with experienced walkers such as Rikko.

“Watching them reunite with people they previously met felt especially precious”, she continues, thinking of that man whom they could see jumping of joy from afar as they were coming to him, and who then could not help but keep on repeating “You, my brother, said you would come again and you did.”

To Rikko, the second meeting, that “confirmation of the encounter”, is crucial. That which, finally, for once, seems to get the word – world back. Trust. Which says – you, whom I see, come back to – you exist. A human.

Beyond the moving and necessary encounter with people on the move, Signe was impressed by Bosnian NGO workers, activists and locals, which dedication and generosity have been of great inspiration for her own integration work in Norway. Bosnians, who often are themselves struggling to make ends meet, have experienced war in their flesh and soul, indeed revealed to be very friendly and helpful to people on the move reaching their borders. From that small house next to the woods open for people to charge their phones or shower, to a welcoming bar challenging the too often hostile anti-migrants signs posted on cafes’ doors – those examples of generosity are “a very strong story to share in such a rich country as Norway”, Signe concludes.

Witnessing how much effort they put in entering Europe, enduring an “heroic journey fighting against all the systems”, as Rikko rightly puts it, implemented in order to drive them to despair, Signe was strongly moved: “When they finally get in, we can do our little part and integrate them in the best way possible.”

“Sometimes, you just need to stand there, quiet. And endure the powerlessness”

Throughout those six days which, to her, felt like a month, so filled and meaningful, Signe recognized the pain of the moments when she found herself having nothing to say nor do, no help to bring but a few words which insignificance left her feeling empty. Recalling an encounter with two single fathers travelling with sick children, whom she listened to for a bit, she remembers her sadness in front of a situation where she could see no glimpse of light – “an experience which comes along with the rest.”

“Sometimes”, Rikko reflects, “the only thing to do is to endure the powerlessness of it. Our first reflex is to find a solution because it is just too hard to endure, because we need it for ourselves, to feel better, knowing we will leave. During those Walks, we do not refuse to do anything or help anyone, but we do not come for this purpose and, when we do so, it is with the knowledge that what people actually need we cannot give – it barely is a little bandage. For those people would not need food, they should not have the need for someone to buy them shoes, if they could work and make a living of their own.”

“That’s where the shame comes again”, Signe picks up, in front of those “people who have the ability and willingness to but are forbidden to work”, thus finding themselves in a humiliating and self-reproducing situation of dependence and passivity.

“From those walks afar, so many aspects can be learnt for home – of which the universal necessity of being with people.”

Reflecting a few months later on the Walk, of which she can feel the memories and effects take a new meaning and shape every day, echoing her present and making her reconsider her reality, Signe, who has now become friends with the Bosnian community of her village, is struck by the universality of the experience.

“Even though the situation at the borders is so different from the one we live ourselves, there remains so many aspects to learn from, which you can translate at home.”

One major lesson – and the purpose of the Walks, really, is the reminder of the vital necessity: we all have to be together. A few weeks after her return to Norway, a fire devastated a part of Signe’s village, which left three hundred people homeless – with whom there was, in such a tragic moment, nothing to share but hopelessness and pain. Helping families, Signe found herself singing to a woman songs from the Walk, recreating that feeling of safety only music and poetry – love – can bring.

Embarking on such an adventure takes, according to Signe, some flexibility and openness, trust in life and people – the leaders of the Walk, people met on the way.

“You have to know it is not a study trip, with a specific well-established program. Accept to go with the flow, from day to day, person to person”.

Having been forever changed by this experience, Signe now hopes more and more people will take the opportunity to go. Walk. And be.
There.

The Walk of Shame is initiated by European activists connected to We Gaan Ze Halen and Civil March for Aleppo.

They have organised several international demonstrations and decided to join forces, together with newcomers who have been through it all.

If you want to get in touch with The Walk of Shame, write to info@walk-of-shame.eu.