You must change attitude

Rouddy Kimpioka was 26 years old when he fled Congo and made his way to the Greek island of Lesbos. Life in the refugee camp Moria was devastating. It was slowly breaking him down, until the day when he said to himself: You must change your attitude. He reminded himself of his value as a human being and it gave him hope. In four years, he has built a cultural and educational centre that is changing lives. 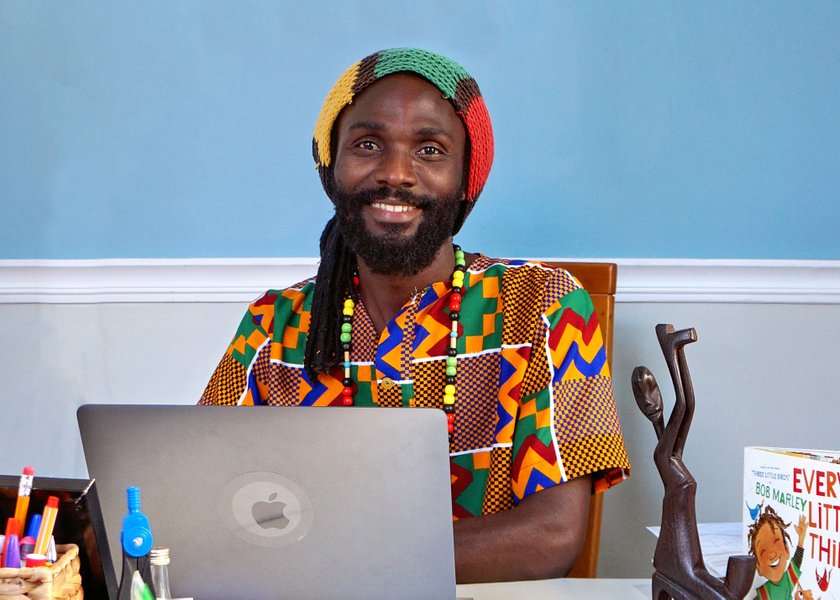 Rouddy Kimpioka says there are two versions of him: one “Rouddy the IT administrator” and one “Rouddy the musician”.
The IT administrator is the young man who, as a fresh graduate, was forced to flee his home country, DR Congo, to save his life. He remains somewhere deep inside.
– He can’t do anything right now. He is stuck.
The musician Rouddy is also an entrepreneur and peacemaker. The one he became as a refugee in Europe.

I am human
Rouddy Kimpioka was 26 years old when he came to Turkey and then made his way to the Greek island of Lesbos. He talks about the shock he experienced, learning that no one offered any help. He talks about not understanding Turkish, Greek or English, the constant conflicts between different refugee groups, the quarrels and the misery. It was slowly breaking him down, until the day when he said to himself: You must change your attitude.
– I reminded myself that I am human and that I have the same value as everyone else. It gave me hope and motivation to change things.

Instead of seeking help, he started helping others. He learned English using his phone and got in touch with an aid organization in the camp to start teaching computer skills, music and dance. Soon he was also in the process of arranging open stage performances on the weekends.
– I never dreamed of becoming a musician, but music changed my life. It is like air, no one can stop it. It is a peace builder, he says.

Wearing the refugee stamp
The more he got involved with others, the more he understood that he was helping himself and he decided to tackle the constant conflicts between the refugee groups.
– I talked to them and said that we all have one thing in common: we wear the refugee stamp on our foreheads. But we are human. We need to stop fighting and start working together instead. We must be one, and I can help you.

“I never dreamed of becoming a musician, but music changed my life. It is like air, no one can stop it. It is a peace builder.”

In 2018, he took the initiative to formally establish his organization, RAD Music International, which after four years is so successful that Rouddy Kimpioka has employed three people to manage the wide range of educational courses and cultural programmes it offers. He himself works for free, having no work permit as an asylum seeker, and is forced to live on the support he receives from his friends.

No response from authorities
Over time, he has gotten Greek musicians involved, and they in turn helped build bridges between the refugees and the local people.
– I would say that half of the population here accepts us.
However, the authorities on Lesvos remain silent.
– I invite them to all the concerts and send a New Year’s greeting every year, but they never respond.

Message of Peace
Rouddy Kimpioka has left the refugee camp Moria and lives in the city of Mytilene, there also most of the courses and programmes take place.
– It is important for the physical and mental health to get out of the camp and see other people and see the town. It is like you lock people inside.
Rouddy has had his asylum application rejected twice and is currently waiting to receive a response to his third application. He dreams of one day continuing his studies to become an automation and robotics engineer. Until then, the music keeps him going:
– Music is love. It makes me think like a human being, to feel my pain and that of others and to know that I can help. I can bring hope. RAD International has succeeded because I brought a message of peace. We eat, play, dance and have fun together. We even hug each other. It never happened before.