People who stand up for the rights of migrants and refugees have common ethical values, but they lack space for reflexivity. It has been just over a year since A World of Neighbours’ research network started the project Public Theology in the Post-Migrant Society: The role of Religion in Multi-Faith Refugee Relief. The time has come to learn about exciting first outcomes. 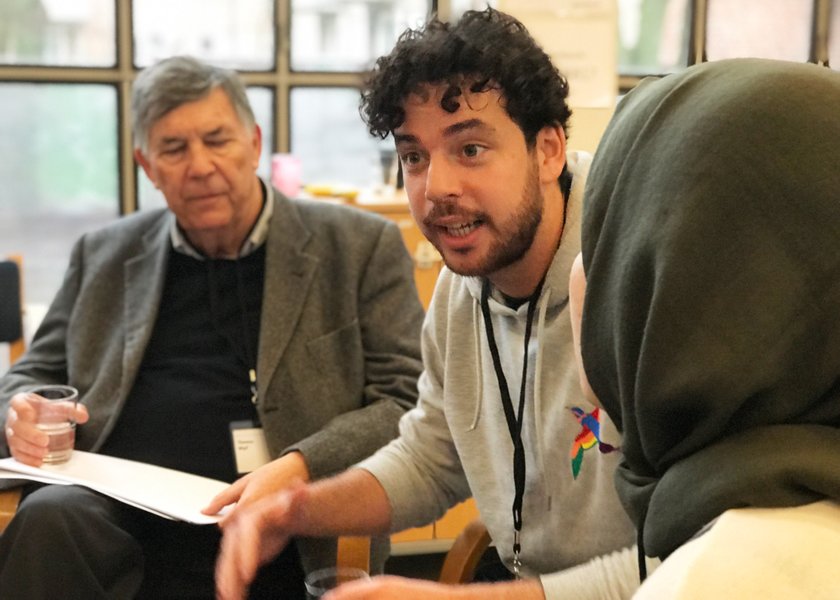 Developed in parallel with the Practitioners’ Network, with the aim of producing “research that is immediately helpful to what AWoN is doing”, the Researcher Network started with two main missions: the constitution of a pool of scholars affiliated with AWoN, serving as resources to practitioners looking for expertise, and the conducting of specific research projects. And, it is safe to say, in both regards, that first year of existence has been one of great achievements already.

So much so that the Lund Mission Society, one of the network’s main financial supporters, along with the Birgit och Sven Håkans Ohlssons Fond and the Royal Society of Edinburgh, reasserted its trust in and enthusiasm for it by renewing its annual grant to support the team in the second year of its research project, “Public Theology in the Post-Migrant Society: The Role of Religion in Multi-Faith Refugee Relief”.

A force for cohesion rather than conflict
Exploring the role of religion in the practices of A World of Neighbours, this study draws on public theology, a multidisciplinary and multidenominational field of studies concentrating on the significance of theologies for the public square, to analyze and assess what impact multi-faith cooperation has on refugee relief across Europe. It examines under which sociological and theological conditions diversity of religions can become a force for cohesion rather than conflict in pluralist societies.

After one year of research, dedicated to the collection of both quantitative and qualitative data through conducting surveys, running interviews, and focus-group discussions held during AWoN’s first annual meeting in Brussels last May, preliminary findings reveal to be very promising.

Next up road trip
Renewed grants for the second year will now allow the researchers to go and visit practitioners on the ground, touring the continent from Scandinavia to Southern Europe, to map faith-based migration work and collect a different set of data.

In that, they will follow the steps of late Dirk Ficca, senior advisor to the former Archbishop of Uppsala, Antje Jacklén, and Anna Hjälm, former program director for A World of Neighbours who, in 2018, went on the road to visit and sit down with no less than 150 actors in more than ten European countries, from different faiths and professions.

What the focus-groups discussions organized in Brussels revealed, indeed, is the shared commitment to common principles among practitioners.

The first exchanges with the practitioners have confirmed some of the researchers’ initial intuitions, challenged others and raised new questions, which has been very exciting for the team. The geopolitical upheavals which have been shaking Europe for the past year, exactly coinciding with the research time frame, have seen a double standard in the welcoming of refugees at the core of heated debates, shedding a harsh light on the overlap of categories of race and religion, which the researchers were interested in in the first place – an overlap which now plays out in an entirely new dimension.

From Safe to Brave Spaces – Conversations in Times of Crisis
In that context, the importance of creating not only safe but brave spaces, where tricky issues can be engaged with and debated in the best way possible, has been a research focus as well. One of the initial goals of the project “Welcoming the Stranger: Resources for a European Multi-Faith Ethics of Migration”, for which Dr Majbritt Lyck-Bowen joined the team, was to develop ethical guidelines to sustain AWoN’s multifaith refugee relief work.

The research team approaches these guidelines more as a set of ideas and intuitions, some kind of toolkit, to best engage with both people on the move and practitioners, drawing on their religious or non-religious background as an ethical force.

Shared commitment to common principles
What the focus-groups discussions organized in Brussels revealed, indeed, is the shared commitment to common principles among practitioners, Ulrich Schmiedel remembers. He is Senior Lecturer in Theology, Politics and Ethics at the University of Edinburgh and head of AWoN research network.
– We asked the practitioners about ethical guidelines, and several practitioners said something along the lines of “We have guidelines, they are just not written anywhere”. There seems to be an implicit understanding, within A World of Neighbours, of what works and what doesn’t work, of what we want to do and what we don’t want to do. So, the task of this project is to make these implicit guidelines explicit, to write them down, to formulate them in a way that you can then actually have a conversation about them and say “Yes, everybody agrees with this” or “No, some of this we may need to work on”. Because only once it is explicit can you be critical of it and think it through.

Constant interaction enriches
That is one of the peculiar assets of the co-production of knowledge methodology the project relies on, which, involving practitioners from the design through the delivery to the dissemination of the research results, aims at benefitting them from the get-go.
– The content of the research very much comes down to what practitioners need, Ulrich emphasizes, noting how this constant interaction has enriched his own work vision of research as well.
– That’s really something I have learnt, for doing the work with A World of Neighbours, I have realized how important it is not to let researchers on their own, especially when it comes to topics such as migration which completely live from what’s happening on the ground. It really makes a difference to have everybody concerned at the table. If you actually do, it is often harder to make it work than you would have thought, it takes much more effort to organize it, but it’s also, at least for me, much more rewarding than I could ever have imagined.

Refreshing and helpful
– It’s interesting to see that reflexivity somehow is a space that really is lacking in the life of practitioners, Ryszard Bobrowicz, Phd in Practical Theology and a AWoN research fellow, confirms.
– Not in the sense that they do not reflect on their own practice but that they do not have space to do that. I realized that this was the first feedback that we received from these focus groups. People were very reluctant and they thought that this was some kind of an interruption in their work, but when the focus groups happened, they realized it was something very refreshing and helpful. This is one of the things I find most important in the work between researchers and practitioners. It creates a space for reflection for both sides. Practice is meeting reflection while reflection is meeting practice.

An engaged audience
This richness was most exemplified by the panel A World of Neighbours was lucky to hold at the European Academy of Religions gathering in Bologna in June. Bringing AWoN scholars, including Ulrich and Ryszard, and practitioners around the table, it was the occasion of a “very lively and high-quality debate” which tackled topics as diverse as the role of Muslim communities for and with refugees – thanks to the intervention of Atallah Fitzgibbon, the post-help paradigm put forward by Rikko Voorberg with his “Walk of Shame” or the framing of race and religion in the media as covered by Dr İdil Akıncı-Pérez.

A very promising discussion, “which gave [them] the chance to try out [their] ideas”, present their preliminary results to a very engaged audience whose reactions opened new perspectives, this event in Bologna was hopefully the first of a series of fruitful conversations opened by the research project.

One year through it and with a half-time report in the making, “Welcoming the Stranger” should have its own closing conference in late Spring next year, to be welcomed by the Universities of Edinburgh or Lund, which have been involved in the project since day one. Thus, focusing on the more scholarly aspect of the research, the event nonetheless will continue to bridge gaps between theory and practice on the one hand, putting academics, activists and people on the move in dialogue, and, on the other hand, inscribe those European debates on multifaith refugee relief in a global context and in comparison with politics imagined and implemented in the Global North and the Global South

Currently drafting some ethical tips and tricks to best engage in multifaith migration work and sustain the politics enacted by A World of Neighbours, hoping to organize an international conference on the topic, AWoN Researchers have been working on that first project for the past year, in order to advocate for original knowledge coproduction, in both its method and intent. Relying on loose connections and the dedication of “a bunch of people willing to help whenever it is needed”, the Researchers Network, which is not formalized yet – an asset, in Ulrich and Ryszard’s eyes – does not stop there.

Co-produced book about A World of Neighbours
It is indeed very excited to announce the upcoming publication of a book about A World of Neighbours. Written by activists and academics, introduced by late Dirk Ficca’s own writings, that collection of texts, one of a kind in the European context, will hopefully open one more brave space for practice and reflection to meet and imagine a more humane and welcoming Europe.